We have the good fortune to live right off Sixth Avenue in the village where Halloween takes on a whole different dimension with the Halloween Parade.

We went up on Susan’s roof and watched from there. A great view and a great show (40 sec video).

A Halloween Board Meeting

Dawn of the Living Costolos
Originally uploaded by FeedBurner Fotos.

When we scheduled today’s FeedBurner board meeitng on Halloween, Dick Costolo told everyone they had to come in costume.

So we did, we came as Dick.

It was one of the most hilarious moments in my board meeting career.

Thanks to Matt Blumberg (holding the laptop in this photo) for the masks and the idea.

Discuss on Twitter
View Discussions
#Photo of the Day
Oct 31, 2006

Congratulations Joe and The Rest of JotSpot

We run our business on JotSpot. It wasn’t a particularly conscious decision. When Brad and I started Union Square Ventures, I hacked together a little Microsoft Access database and we were using that to log all the deals that were coming in.

When we hired Charlie in early 2005, he took one look at that database and had an allergic reaction. So one day, he got a JotSpot account, and dumped all the database records from Access into a wiki.

Then we started doing other stuff on the wiki. Wikis are organic, they just grow and grow. We now use JotSpot to organize most aspects of our business that don’t involve a general ledger.

Sure there are things about JotSpot that could be better.  Searching and filtering are at the top of our wish list. So Google seems to be a particularly good home for JotSpot. For those who didn’t see the news, Google bought JotSpot this week.

Do I worry that all of our confidential information is now on Google owned and operated servers? Not really, but I am working on a long thought piece about that particular issue that I hope to get to this week.

Mostly I am happy for Joe Kraus and the team at JotSpot.  They built a great web app, put it out there, got people using it, built a business, and now they’ve gotten the payday they deserve. Well done JotSpot.

I have to get up early and fly to Chicago tomorrow. I am not sure I’ll be able to post (maybe something on the plane?).

So here’s a song I heard tonite as I was cleaning up from a dinner party. I love this song. 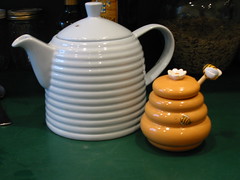 They are blog posts that get indexed high on certain search terms and get a lot of traffic long after they were written.

I’ve got a bunch of them.

Lately I’ve been getting a bunch of comments on my Best Rice Krispies Ad post from six months ago. Comments are generally correlated with traffic. So I decided to figure out why I am getting so much traffic to that post these days. One search for rice krispies on Google explained it. A top link like that for a search term that is relatively popular will bring a lot of traffic. I’ve had five hits on that post in the past hour from Google. Not all of them are from that same search term, but they are all slight variations on it. Maybe there is something going on with a rice krispies ad that is causing a lot of people to search Google today. Who knows?

According to Google Analytics 43% of my web traffic (not feeds) comes from Google. Here’s the chart. I don’t know how much of that is truly search driven. I’ve seen people find my blog by typing AVC into google or fred wilson into google. I bet at least a third of my google traffic comes from people who don’t recall my URL or don’t want to be bothered typing it in.

But I bet another third of my google traffic is going into honeypots like the rice krispies ad, the allen iverson post, the neil young post, my high school post (where I am above the high school’s own website), and a bunch of others.

I am not sure that I turn many of the people who come to these honeypots into regular readers, but I am sure a few of them come back for more. In any case, I find the search/blog ecosystem fascinating and I think honeypots are an important factor that we should all pay more attention to. One of the greatest concerts I have ever seen was Peter Gabriel’s 1982 tour. I posted a bit about that show in this post last year and yesterday a reader left a comment with links to some live bootlegs of the Boston (Orpheum Theater) show from that tour.

Here’s a couple of my favorites:

Lay Your Hands On Me (live) – Peter Gabriel – When Gabriel jumped into the audience and they passed him around.

Family Snapshot (live) – Peter Gabriel – One of his most intense songs. 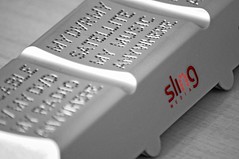 I finally got around to setting up the Slingbox I got back in the spring when I met Blake at a conference and he talked me into getting one.

It hadn’t been a priority because we all use Macs in our family and there is no SlingPlayer for the Mac yet.

But the rumormill suggests that the Mac SlingPlayer is going to come out in beta any day now.

So I spent an hour or so today setting up the Slingbox in my family room entertainment cabinet.

It was relatively painless. I only had one ethernet jack in there and it was being used by the xbox 360 so I had to put in an ethernet switch. Now I’ve got 5 ethernet ports in my entertainment cabinet. I bet I’ll be using more of them soon.

The Slingbox does a nice job of controlling my DirecTV Tivo and the software installed fine on my old ThinkPad.

I’ll let you know what I think when I install the Mac Slingplayer. I think its going to be a hit with my kids. I have been on a Broken Social Scene binge since hearing that live version of Stars and Sons the other day on The Hype Machine.

I got this record in early 2003, before I started blogging so I’ve never talked about it on this blog. It’s a terrific record. It creates a certain kind of atmosphere that I can’t really describe but it’s working great for me as the weather turns cold and I feel like lounging around with a warm cup of tea and some great music.

Highlights of the record are Lover’s Split, Stars and Sons, and Anthems for a Seventeen Year Old Girl.

You can get the record on Amazon. 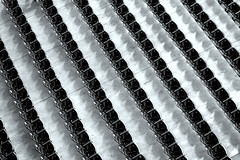 a place for the claustrophobic
Originally uploaded by slight clutter.

You hear about serial entrepreneurs all the time, people who start company after company. We love to back people like that and have done that five times already in our current fund.

But what about the parallel entrepreneur? The person who can’t do one thing at a time. They need to do multiple startups at the same time.

The best example of this is Bill Gross and his incubator Idealab. There is a good piece on Bill in yesterday’s New York Times (sub req’d uggh).

It’s a good story. Bill decides to be a parallel entrepreneur, forms Idealab, the Internet happens, he starts dozens of companies in parallel, the market goes nuts, he decides to take Idealab public, the market breaks, he’s down to his last $50mm, he steps on the breaks hard, he’s sued by his investors, but he hangs in there, focuses intently on a solar energy startup, gets his mojo back, and Idealab is now thriving again.

I admire Bill Gross for his creativity, intellect, and tenacity. He invented paid search before Google perfected it. He seems to be a never ending fountain of good ideas.

But Bill is not alone. There are many entrepreneurs who would, if given the opportunity to operate in parallel, produce a number of interesting companies.

This week we saw Evan Williams launch Obvious Corporation. I threw together a quick post noting that I think it’s interesting and that I intended to blog more about it later (which I am now doing). My friend Steve left this comment to that post:

Am I missing something? Isn’t Obvious an incubator?

Well I guess you could call Obvious an incubator, but I think of incubators as entities that have capital and attract ideas looking for a place to turn into businesses. I think that model doesn’t work as we all proved to ourselves in the late 90s.

Obvious is a place where Evan and other developers can build web services and launch them. They can do this in parallel as they have already done with Odeo and Twitter. Buying out the investors in Odeo means that Evan and his colleagues are doing this with their own time and money.

When justified by growth, resource needs, and desire of the team, we
will spin off growing properties to form their own entities (with
outside investment). It’s not that we’re against investors and
acquisitions. That model works great for some things—especially once
the idea is proven.

I think its a smart model. Build a network of web services (Evan calls them web apps), use the popularity of one service to launch another, keep the services that are small but successful, shut down the ones that don’t work, and spin off the ones that really take off. I like it.

This San Jose Mercury story talks about how Kevin Rose is trying to build a second company, Revision3, while still running Digg. It quotes a couple parallel entrepreneurs I’ve gotten to know this year, Sam Yagan and Scott Rafer.

Sam Yagan, who co-founded the file-sharing service eDonkey in 2002 and
the online dating site OkCupid in 2003 (the former was shuttered in
late summer), said, “No question there’s a loss when the CEO isn’t
around. If someone came to me with a great [second] start-up idea now,
I wouldn’t do it.”

“Basically, everyone I know is involved in five or six projects right
now,” said Scott Rafer, 38, former CEO of the search engine Feedster
and now CEO of blog tracker MyBloglog.com, co-founder of Mashery.com, a
stealth-mode company aiming to help Web developers, and chairman of
WiFinder.com, a WiFi hotspot directory. “VCs spread their risk across
numerous companies,” said Rafer. “Why shouldn’t we?”

Why Are Ads So Hated?

Ash sent me a link to his theoretical valuation of Wikipedia and I forwarded it to Jason who then wrote this post suggesting that Wikipedia run one leaderboard per page and give all the money it generates to charity.

Jason is suggesting the exact same thing for Wikipedia. He thinks one leaderboard could generate $100mm annually. That is a lot of money to be leaving on the table. I like the idea.

But if you read the comments to Jason’s post, the disgust is literally dripping off the page. It seems that there are a lot of people who hate ads (or hate Jason or both).

I just don’t get that. Ads are content just like everything else. Good ones that are relevant (and wikipedia being a search/keyword driven site could target the ads so easily) and attractive are additive in my opinion. But clearly not everyone feels that way.