The Evolution Of The USV Thesis (and usv.com)

USV is a thesis driven venture capital firm. Brad and I locked into that notion at the very start of our partnership in the summer of 2003. We decided that we would have a thesis, stick to it, and evolve it. And we have done that. We and the partners who have joined us over the years are very proud of that.

Our partner Andy has now written two blog posts outlining our thesis. He published the first one in May 2012 and he published an updated one yesterday. I encourage everyone to head over to the updated usv.com and read it.

The thing about our investment thesis it that it evolves over time. We stick to it but we evolve it. And we do it consciously. Writing it down forces us to be clear in our thinking and draw distinctions that matter. The evolution sometimes includes leaving a sector (like ad:tech which we have not invested in for almost ten years now). But mostly it involves adding new areas while maintaining others.

This chart from Andy’s post shows how we have evolved our thesis over time. This is a chart of active investments so anything we have exited or has shut down is not included in this chart. 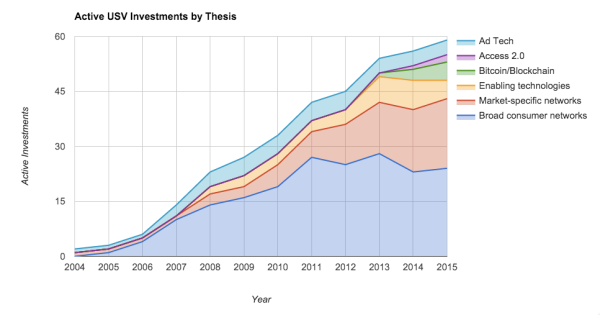 Andy’s post explains how we have evolved to this set of investment theses over time. This is where we are right now, but if there is one thing I am certain of, it is that this is not where we will be a few years from now. The evolution will continue.

Speaking of evolution, we have also evolved our website. It started out as an online brochure in 2003 when we started raising our first fund. Then in 2005, we turned it into a blog. I think we were the first VC firm to make our homepage a blog. But we didn’t blog that frequently on usv.com so the page was not that lively. We tried to fix that with a redesign we launched in 2009. That was a lot better but we still didn’t have enough action on the page so in 2012 we started a process to reimagine our website. That led to a linkblog that we launched in 2013. Ultimately that didn’t work that well for us either. So this summer Jonathan and Nick started hacking on another idea, which is to focus the home page on the topics that are most interesting to us right now.

Our topic centric website is now live at usv.com. We have a new design and color scheme. But mostly we have a new way of showcasing our thoughts and interests. I think it will work much better for us and hopefully for the entrepreneurs who show up at usv.com and want to know a bit about us. Give it a spin and follow some topics that you share an interest in with us.