Our portfolio company Kickstarter released a report yesterday that was published by a Professor at the University Of Pennsylvania named Ethan Mollick. Ethan and his colleagues at Penn surveyed nearly 500,000 backers to look at failure rates across the entire Kickstarter marketplace. They did not survey other crowdfunding services so this data is solely about Kickstarter projects.

Here is what Ethan found: 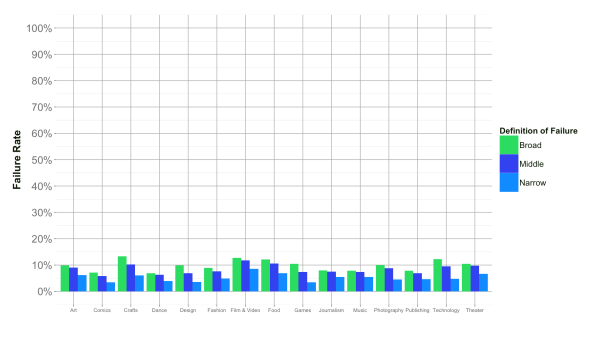 I really like what Kickstarter had to say about this report:

Is a 9% failure rate reasonable for a community of people trying to bring creative projects to life? We think so, but we also understand that the risk of failure may deter some people from participating. We respect that. We want everyone to understand exactly how Kickstarter works — that it’s not a store, and that amid creativity and innovation there is risk and failure.

Failure is to be expected in a marketplace. But we should also measure it and understand it so funders can “price the risk”. Right now, it seems that roughly one in ten Kickstarter projects fail. We should all understand that when we back a project. Doing so will be good for everyone.