We get feedback from the leaders of our portfolio companies on an annual basis. It helps me get better at what I do and I love it.

One area that I am constantly challenged to improve on is accessibility.

The common refrain is “I know you are busy and I hate to bother you.”

To which I reply “It is your job to bother me and my job to be responsive when you do.”

But even so, getting portfolio company leaders to feel that they can reach out, even on small things, is a challenge.

An approach that I have taken and many other VCs also take is to schedule weekly or bi-weekly catch ups with the portfolio leaders.

That works but sometimes what is needed can’t wait for that or is a “in the moment thing” like “today sucked.”

And sometimes helping someone deal with “today sucked” gets you to a level of comfort with a leader that allows you to help on many other things too.

My point is simple. Being there for portfolio leaders is job number one for venture capitalists. If we can’t do that, what can we do?

So working on that is a big part of my personal development and I work on it every day.

The first three “estates” of society, classically, are the clergy, the nobility, and everyone else.

When the printing press arrived during the Renaissance/Enlightenment period and a mainstream press emerged, a fourth voice, The Fourth Estate, arrived on the scene and the mainstream press has had a long, strong, and lasting effect on society.

As far back as the counterculture years of the 60s, the term Fifth Estate emerged to describe underground newspapers. But it was the web, first with online communities, then blogging, and finally social media, that gave a voice to everyone.

And that is why Zuckerberg called social media “the Fifth Estate.”

As someone who has been blogging for most of the last two decades and who has enjoyed a voice that has been amplified by technology, I very much believe in the power of this Fifth Estate. I think it will have as strong and lasting effect on society as the Fourth Estate has had and will continue to have.

I also understand that the platforms that currently host the Fifth Estate have a tremendous amount of power to shape it, regulate it, and constrain it.

The reason this blog runs on open source software (WordPress) and is hosted on a server that I control is that I don’t want my voice hostage to one of these tech platforms.

I do use Twitter regularly and in doing so, I participate in a constrained platform. I don’t use Facebook regularly, partially because I don’t want to be exposed to or constrained by that platform.

But this post is not about Facebook vs Twitter. They are more similar than they are different. They are large and powerful tech platforms where the Fifth Estate materializes in our society.

They are not the only platforms that host the Fifth Estate. There are so many that matter. There is Reddit and the many other message boards like it. There are blogging platforms like Medium. And there are communities that exist to serve particular interests, including ones that cater to hateful and awful people.

The question that Zuckerberg posed for society last week is what power do we want to convey in these tech platforms to shape and constrain the Fifth Estate.

My vote is very little, if any.

I believe that the power that Facebook and Twitter and other platforms wield on society by virtue of their dominance is a fleeting power and that in time they will be replaced by something else that is better for society.

For now they have a lot of power and that is causing a lot of hand wringing in the halls of Washington and elsewhere.

But we should be careful not to hand them more power. Or worse require them to censor some voices and not others.

This tweetstorm by my friend Balaji says it very well.

If a plebiscite was held, few people would want to give up their own right to voice on social media.

They may want to silence someone else, but they would not want to give up their own right.

Nor should it be taken away without good reason and due process.

Video Of The Week: The Crypto Custody Business

A few weeks ago my partner Nick and Sam McIngvale, who runs our portfolio company Coinbase’s custody business, did a talk at the CoinAlts conference. In it they talk about the evolving role of custody in the crypto markets, and what they are excited about in crypto in the next few years.

I remember back in the early 2000s, the direct marketing industry and the tech sector worked with Congress to craft sensible regulations for email marketing. The result was called CAN-SPAM and it was passed into law in 2003. The law has been modified to clarify certain terms and rules. While it certainly was not perfect (what is perfect?), it paved the way for a lot of progress in making email a workable medium for consumers and businesses.

There are no such rules in the location data business. Any mobile app can collect data on where you are and do what they want with it. That is not good for anyone, including the companies who are collecting that data.

In the op-ed, Jeff (Foursquare’s CEO) outlines what he thinks would be reasonable regulation. Here are the highlights:

The entire op-ed is a good read and Jeff goes into a lot more detail than I did on each of these points.

I hope this leads to action in Congress and we get the right legislation as a result.

Normally when we travel, The Gotham Gal posts about the things we do. She is a way better travel blogger than I am.

But today we did something that I want to talk a bit about.

We visited the Auschwitz concentration camps in southern Poland.

This is the first time I have visited one of these camps.

I have been to the various Holocaust memorials and have seen the photographs and heard and read the stories.

But being there in person is something else.

Staring into the rubble of a gas chamber (one of four at Birkenau) where hundreds of thousands were murdered because of their ethnicity and faith takes your breath away and fills your heart with dread.

It is not a pleasurable experience in the least.

But it is a very moving one.

One of the things I have come to understand about life is that bearing witness is something we must all do. We cannot avoid the pain of humanity. We must stare it in the face and feel it.

We did that today and I am glad we did.

I am sitting in the airport lounge in Geneva waiting to board an airplane. I am here because yesterday was the inaugural Libra Association member council meeting. The Libra Association is a Swiss organization which will operate the Libra blockchain network and the Libra reserve.

It is fashionable to be negative about the Libra project right now. And it is equally fashionable to call it “Facebook’s crypto-currency project.” Both are understandable under the circumstances.

But even more important is Libra’s mission to create a stable cryptocurrency that can operate at sufficient scale such that Facebook and others can use it as a means of exchange/payment system in their applications.

The most meaningful conversations I had yesterday were with the members from Kiva and Women’s World Banking who joined the Libra Association because the people they serve are under-banked and under-provided for by the legacy financial system. Like them, I believe a stable cryptocurrency that is broadly adopted around the world will bring new services to people who don’t have access to the financial system that many of us who read this blog do.

One of the powerful things about being in the venture capital business is that we can support projects that are necessary but unproven, unpopular, and/or misunderstood. Not everyone can do that and so it is even more important that we do.

We are sitting in the gate at London City Airport waiting for an early morning flight. Next to every seat in the waiting area is a bank of power outlets that look like this:

You will notice that there is one UK standard outlet and four USB outlets.

And, no matter where in the world you are from, it is likely that you have a USB cable for your phone.

I am charging my phone while I write this and I don’t have a UK power adapter on me.

That’s the power of a standard like USB which is only getting better and better over time.

I wonder if someday we won’t even have to deal with all of this:

Discuss on Twitter
View Discussions
#Blogging On The Road
Oct 13, 2019

But there is another way to search my blog posts, both here at AVC, and also the ones I have written on USV.com.

With our recently launched refresh of USV.com, there is now at tab at the top called “Writing.” It looks like this on a mobile phone: 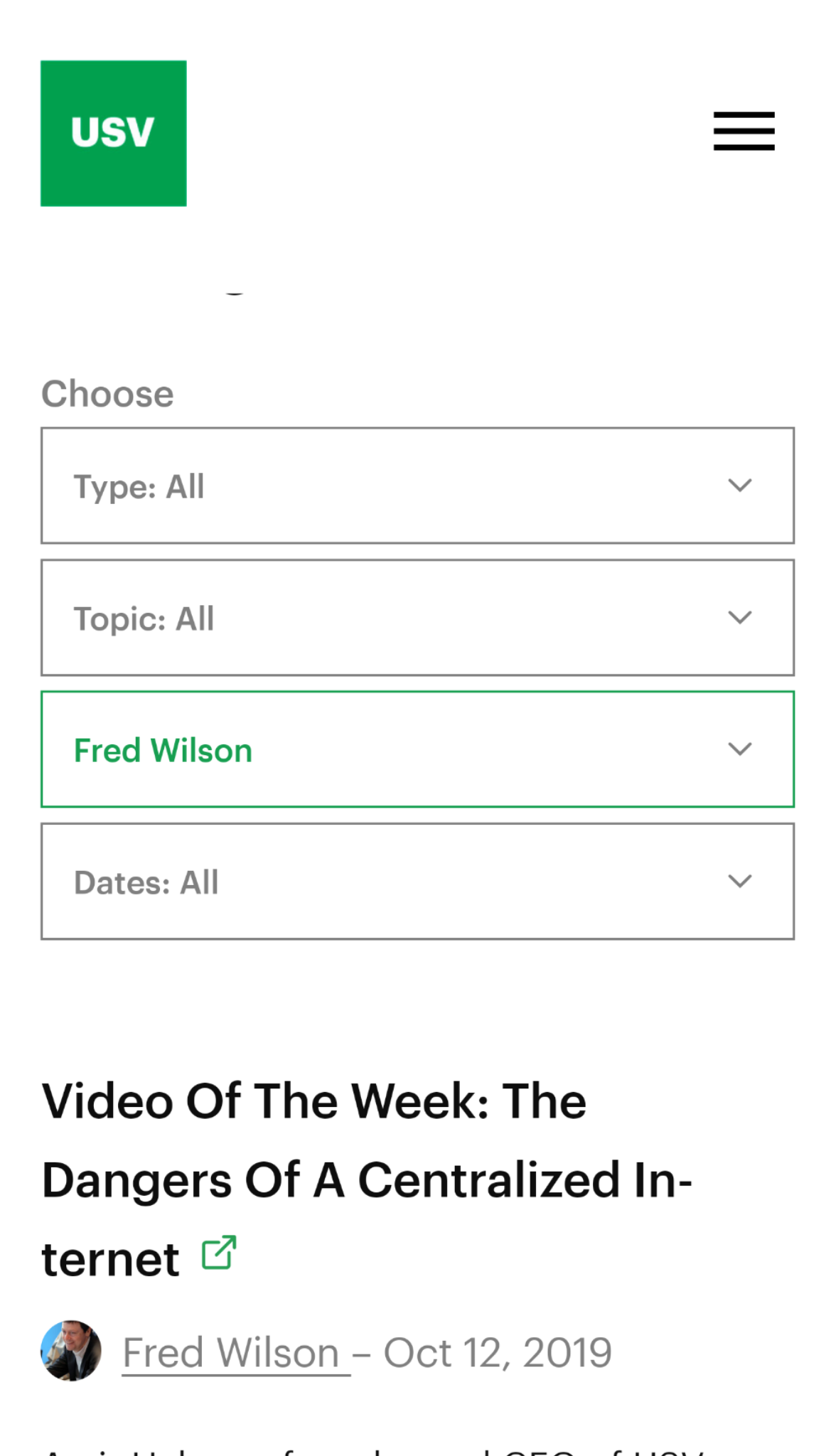 You can search by type (USV blog only, team member blogs only, or all), topic, author, and date.

This search engine includes writing by many USV alums on the USV blog and all of the current USV team members who blog regularly. It is quite a library of content, mostly on tech, venture capital, startups, and that sort of thing. But naturally it veers into many other topics from time to time.

If you want to read what USV team members (current and past) have to say about something, there is now a resource to do that. And we hope to make it even better over time by improving the metadata and search functionality around this large library of content.

Video Of The Week: The Dangers Of A Centralized Internet

Amir Haleem, founder and CEO of USV portfolio company Helium, gave this talk last year and it explains why he started Helium.

Funding Friday: Of Sight And Sound

I backed this project this morning. I am a big fan of artistic collaboration and the amazing things that come from it