What should a high profile personal/professional blog look like?

Feld Thoughts just revamped its style sheet and I think it looks awesome.

A Blast From The Past

I was loading up Rhapsody this morning and saw a "new release" on the front page.

Take It Easy – The Fugees

Hmm.  I thought they were long gone.

Back in the mid 90s, we used to listen to the Fugees all the time.  They had the coolest sound. In fact their record from 1996, The Score, is on my Top 50 list.

Then Lauryn Hill put out The Miseducation which was a great record and then proceeded to disappear.

And now they are apparently back, ten years later.  Their new single is OK, nothing amazing, but I’ll wait for the full length record, due sometime early next year.

I sure hope they can bring that cool sound back and do it right.

One of the
companies that I am involved in is working on reshaping a large and important
industry with a new technology platform.

The team
that is building this company is first rate and has already built several very
valuable companies in this large and important
industry.

They are
seeking to attract a new member to their team who can oversee product management
and design at a senior level.

Here are
the important characteristics of the person they are
seeking:

If you are
this person, or if you know of a person who we should be talking to, please send
me an email at jobs.usv at gmail.com.

OK, so turning over my weekly VC Cliche of the week post to the readers was a resounding success last week.

I posted all of the cliches on the front page and the explanations are in the comments.

Go take a look at them, some really good ones in there.

But this week I am going back to the traditional format where I give you a cliche and expound on it a bit.

This week I am talking about bridge loans.  Bridges are venture financings where the investors loan the company some money to tide them over until something happens. There are a lot of reasons for doing a bridge loan. But one thing is for sure, if you do a bridge, it has to be a bridge to somewhere.

The first venture deal I ever worked on was a loser. A big loser.  We had something like five or six bridge loans into the company before we finally put ourselves (and the company) out of our misery.

We were fooling ourselves that eventually we’d find a new investor who would come in and fund the company.  So we kept loaning the company in hopes that the new investor would show up.  They didn’t.  Because hope is not a strategy.

I suspect that if you get to the end of the first bridge and nothing good has happened, its time to stop bridging.  Because it has to be a bridge to somewhere.

The "whatever they want to get done" is usually an external venture financing with new money at a higher price.  Or it could be a sale of the company.

The latter scenario in particular is a good reason for a bridge.  There is no reason to put a ton more money into a company, and cause lots of dilution, if the Company is going to be sold shortly.  So putting a bridge in place to fund the Company during its talks with buyers is often an excellent idea.

If the company is sold, that is somewhere.

if the company is financed by new money, that is somewhere.

If the company is financed by insiders, that is somewhere.

But another bridge is nowhere.

So when doing a bridge, make sure its a bridge to somewhere.

I left something important out of my posting, subscribing and tagging post that I did in early August.

There is a fourth pillar of the blogging movement and that is search.

That became obvious to me last night as I slept on Google Base.

Google Base is a web service that allows users to post listings (and probably a lot more) to a Google operated database that Google will crawl and add to their index.  John Battelle asks a good question and that is will the rest of us be able to crawl Google Base?

Regardless of the answer to John’s important question, this means whenever you post something to Google Base, it appears in Google Search.

Assuming you can do all of those things, then posting a listing to Google Base is blogging in my definition of blogging.

And that’s where the rub is.

Because community is where the action is in classifieds.

According to my friend Mark Pincus, the founder of classifieds community Tribe.net (who has already blogged his thoughts on Google Base):

People are looking for the best leads. They will go where the time/good lead ratio is the lowest. Good leads are driven by community which reduces time and identity lets you increase the trust around leads which reduces time too (and increases safety).

The community model that Mark talks about is the foundation of Craigslist.  Posting a listing to Craigslist isn’t really blogging either but they have built a community there anyway.

I think if Google is simply aggregating user listings, like it aggregates text CPC ads, then Craigslist has less to fear from Google Base.  If Google Base is going to build a community, like Tribe or MySpace, then everyone has a lot to fear.

I suppose we will know soon although to date Google’s efforts in community have been miserable failures.

eBay, on the other hand, is screwed.

As Mark talks about in his post, and as John Battelle does in his, we are seeing a movement toward free and open listings.  Everyone is crawling everyone.  Listings are a commodity. Community is what matters.

We’ve been expecting this and I alluded to it in a prior post.

I wrote a long rambing post with my thoughts but I think I’ll sleep on it and post tomorrow. 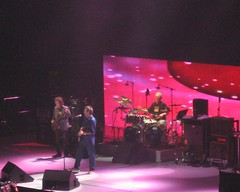 The Power and Perils of Peer Production

There is a good story about the powers and perils of peer production on the Union Square Ventures blog this afternoon.

Delicious released some new features last night and one of them was a more prominent "search" field throughout the service.

I would be remiss if I didn’t say that this is not intended to replace traditional web search.

This is about discovering links that others have posted to delicious.  It’s a subtle, but important, distinction.

But with millions of links, the results are pretty interesting.

Give it a try.

And while you are at it, if you are using Firefox, you can add a Firefox plug-in that adds delicious to your choices in the Firefox search field on the upper right of the browser.  It’s available here.

They say that conventional wisdom is wrong.

If that is so, then maybe we aren’t in bubble 2.0, because everywhere I look this morning, I am hearing we are back in 1999.

First there is David Carr’s confusing argument why we should pay for the NY Times. I am with David’s daughter in case you wondered.  In the piece, David says:

We have been through this before, back in 1999, with everyone rushing
to harvest eyeballs and then worrying about making them cash-flow
later. But this time around, at least on the Web, there is a business
model that involves search, targeted advertising and the ability to
scale.

Then there is Rebecca Buckman’s roundup on VC investing in the WSJ (no link love for paid content).  Rebecca opens up that piece with:

It’s looking almost like 1999 again in Silicon Valley, with Internet
investments snaring a significant increase in funding from venture
capitalists in the third quarter.

It certainly looks like 1999 from where I sit too but I’ve always been served best by being a contrarian.  Tough call.